Houston: It’s Not What You Thought It Was

When we picked up Daniel and Cristin from the airport on Friday afternoon, I never in my wildest imagination expected us to make pit stops at a Blockbuster Video (mind blown) and a nightclub on Richmond Avenue, but we did! I should have seen this coming. After all, I had officially told our guests that this trip was called “Houston: It’s NOT What You Thought It Was.” Other people have been given a similar Houston experience by Kayla and I (Kristen! Kelsey!), and all of them can attest that on their way to the airport they understand that Houston isn’t what the rest of the country thinks it is. Sure, it is an oil boomtown that is growing at a rapid clip while the rest of the country sputters through a recession, but Houston has character. Houston has weird stuff. Houston has art. Houston has diversity. Houston has the Astros….errr….the Astros!

We were thrilled to have Daniel and Cristin staying with us for the weekend and getting their first taste of Houston. Cristin and Kayla grew up and went to high school together (Fallbrook what what). They go way back. They were in show choir together in 8th grade (before Glee made it cool – they were pre-hipsters in a way) and that pretty much says it all. Cristin and Daniel have been living in Boston for a few years after moving for work so we don’t get to see them as much as we’d like to, but when we do we always end up having a great time.

We started off the weekend at El Tiempo Cantina for their first taste of Tex-Mex. Kayla and I went there the night before with some of our family (Ciolinos) that was in town. No lie, every person that visits us wants to go to El Tiempo and I can’t blame them. The place is the best Mexican in Houston and maybe anywhere in the States. Daniel put on a fajita-eatingdevouring clinic with the help of his Aggie sister Erin (A A A A…she stayed with us Friday night). After dinner we saw some odd Houston sites such as the Beer Can House. Inspirational? Perhaps. Then we took them to Burp the Bayou. Burping the Bayou is so much fun it is sick. Right on the bayou next to the Wortham Center there is a red button. You press it and….I don’t want to give it away, but it is so wrong it is right. Post bayou-burping, we went to James Turrell’s Twilight Epiphany Skyspace at Rice University. I’ve blogged before about this place and I have to say that it never disappoints. Each subsequent visit adds a new layer to the experience. Daniel, Cristin, and Erin seemed to really enjoy it. The docent told Daniel that he was pissing her off because he had out his cell phone. It was a real friendly Texas welcome!

Things we learned Friday night – Kayla is not as good at Mexican Train Dominos as she believes. Collectively, we can quote the entirety of Pitch Perfect. Daniel is pitch perfect. I have absolutely no resistance to red velvet ANYTHING.

On Saturday morning, Kayla and I cooked a big breakfast for everyone. We learned who is ok with letting their food touch and who needs multiple plates (me). Daniel and Cristin were doubling up this weekend. Daniel’s boss is from Houston and got married Saturday afternoon. While they were living it up at the wedding, Kayla and I were missing them. When we got the phone call at 6:30 that they were coming back, we did a metaphorical Bryan Brothers chest bump.

Who knew there was a Blockbuster Video in the Heights? We were at the corner of 20th and Main when Cristin spotted the relic of a time gone by. We immediately lost all control of ourselves. We had thought that Blockbuster went completely out of business a few years ago. Therefore, we were convinced that we had done some form of hot tub time travel. However, we were in my car so it was probably more Back to the Future than anything else. The inside of Blockbuster could have been the strangest place in Texas. Everything was faded and looked like 1999 (or maybe 2000 if Y2K had gone as planned). They had a “Now Hiring” sign. Interesting. From there, we went to a 24-hr Shipley’s Donuts and Daniel and Cristin lost their Shipley virginity. Daniel told the woman working that he had never had one before and she looked at him like he was insane. An adult Shipley’s virgin? You better believe it!

And then the night took an interesting turn. Apparently, they like to country line dance and two-step and where better to do that (Thanks, Yelp) than Wild West on Richmond. Yes, we went out to a club on Richmond Avenue. The whole time I felt like I was in a Gwendolyn Zepeda short story. “For one more song, dollar fifty Tequila shots. Get your picture taken with Ashley the sexy shot girl as she pours it into your mouth.” Oh dear Lord, I wish I was joking. I wrote that quote down. We didn’t get shots, but not because of Ashley. She seemed wholesome enough. She really knew how to pour a tequila shot. Daniel and Cristin showed us how to two-step and we TORE IT UP. I had to pull Kayla off of the dance floor a few times. She was a woman possessed….with a newfound love of country music!

Things we learned – The Wobble is a line dance. It isn’t the best line dance. Jack n’ the Box at 2:30am is delicious! We like when our friends come in town, but we miss them when they go to weddings. Blockbuster Video does exist, albeit in a strange way. Parking at Wild West is difficult, but Kayla handles adversity well.

Needless to say, we woke up at 10am on Sunday. I got up and Kayla begged me to go back to sleep because it was “too early.” We decided to take them to our favorite breakfast place (and maybe just favorite in general), Empire Café. There was a line out the door, but it moved along just fine. Breakfast was absolutely delicious. We ordered Italian Toast for the table!!! We had wanted to try it and saw this as the perfect occasion. Delicious.

Root root root for the Astros! We went to see the ridiculous (in a bad way) Astros. Wow. If you want to know what it looks like for a professional baseball player to miss routine ground balls and generally suck then please, without hesitation, make your way to Minute Maid Park! I knock them, but we had a lot of fun and there were a lot more people than we expected. We bought the cheap seats, but moved to better ones. This is when I learned that Cristin has some acting chops. She pulled out her ticket and had a mini conversation with herself about how these were the right seats. The Astros lost. Kayla kept cheering for the Mariners and I had to remind her that we live in Houston. It was Kayla Classic. Love that woman!

Houston, It’s NOT What You Thought It Was Trips are never complete without a visit to the Art Car Museum and the David Adickes’ giant president heads near Target in Sawyer Heights. First, we went to the Art Car Museum. We love love love this place and I think this exhibit was one of their better ones. There were animal heads along the wall and the 3 cars being showcased were so cool. One had garden gnomes all over it. Love it!

They seemed to really get a kick out of the Art Car Museum, but the president head sculptures seemed to be one of their favorite things from the weekend. This place is so random that most locals don’t even know that it exists or at least don’t know where it is. Essentially, it is a barnyard of sorts with 30+ statues/busts of US Presidents that are about 20-30 feet high. There is a 60 foot Beatles statue(s) as well. We spent a good 20 minutes wandering around the place and at one point I parkoured off of George W. Bush’s shoulder. Daniel and I climbed up on W’s shoulders and took an “ironic yolo” picture. Good times!

Things we learned Sunday – Kayla and Cristin are convinced that the police will come when you climb onto George W. Bush’s shoulders. If you run at a cat, it will run further away from you. We can’t name any Astros. I make good dog faces. Cristin has an interesting way of putting food in to-go boxes. We all love cheesecake….and donuts warmed up in the microwave at 10pm.

The aftermath – We were sad to drop Daniel and Cristin off at the airport this morning. We had a ridiculous (the good kind) amount of fun this weekend with them and are now chomping at the bits to visit them in Boston. On the way back from the airport we talked about how lucky we are to have good friends like them. The only downside is that we live (everyone lives) so far away. Our country is massive and I wish it were easier to travel around so that we could see our friends more often. We hadn’t seen them since we got married (13 months ago). That’s too long. If anything, I think we realized how important these types of friendships are and that we need to make more of a dedicated effort to see our far-away friends more often. We can at least start with some regular Skype sessions! 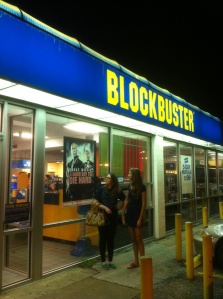 Kayla and Cristin contemplating the existence of Blockbuster 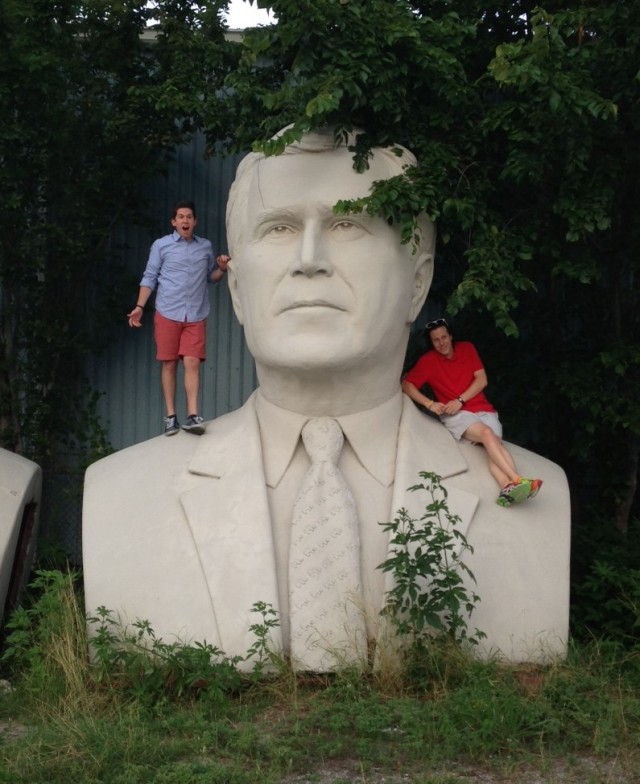 4 thoughts on “Houston: It’s Not What You Thought It Was”