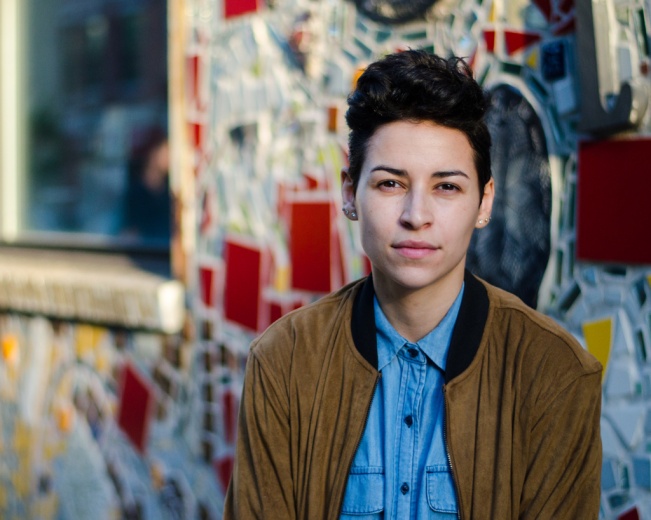 What is your earliest memory of writing?

In high school I had a special notebook where I wrote raps and jokes. Those were the two artistic forms of expression where I thought I could really be myself. At that time, I thought poetry sounded a particular way and nothing like me, so I steered clear of that until college.

How did you become a writer?

That’s a tough question because I think “becoming” a writer is something I’m constantly doing in a sense. Paying attention to my voice and how it evolves and develops feels like a supernatural thing to me. But to answer your question in a more straightforward way, I really stumbled into it. I didn’t know a world of writing and performance existed for me until college, but once I was introduced to writers that were speaking in a language that was familiar to me everything was a flood. I wrote frantically, filling up notepads, and finding a new thirst for understanding myself and the world around me.

Tell us about your writing process.

I feel like this is something I’m constantly developing a new understanding of: the “what works for me” question. And truthful it changes. I do know I’ve always liked writing very late at night. and I think it has to do with my subconscious taking over. In terms of writing the poem itself, often times the first line of a poem ends up somewhere in the middle of whatever I end up with, so that I’m really filling out what’s missing in the beginning and end. However, if I have a strong first line that captures some kind of unnamable feeling I have, then that’s always a good sign that the writing will flow a lot easier. I hate the feeling that I’m forcing something. It also means that I write way more poems than I end up finishing and I’m okay with that, because I think these freewrites (which I always save) lead me to the poems I really need to be writing.

What are you working on now?

My first manuscript of poetry.

Have you ever suffered from writer’s block?

I have and it’s quiet frustrating, but it’s always less about the writing itself and more about what I have going on elsewhere in my brain.

Which writers and teachers have most influenced you as a writer?

What books have had the biggest impact on your trajectory?

What’s your advice to aspiring writers?

Tell your version of the truth. Write authentically. There are so many reasons to be silent, often times I look into those rooms for what I need to say. Worry less about “how good it is” and more about whether you’re writing honestly. Chances are the more you write about the things you care about, the more the audience will respond to that.

***For more on Denice Frohman, see: